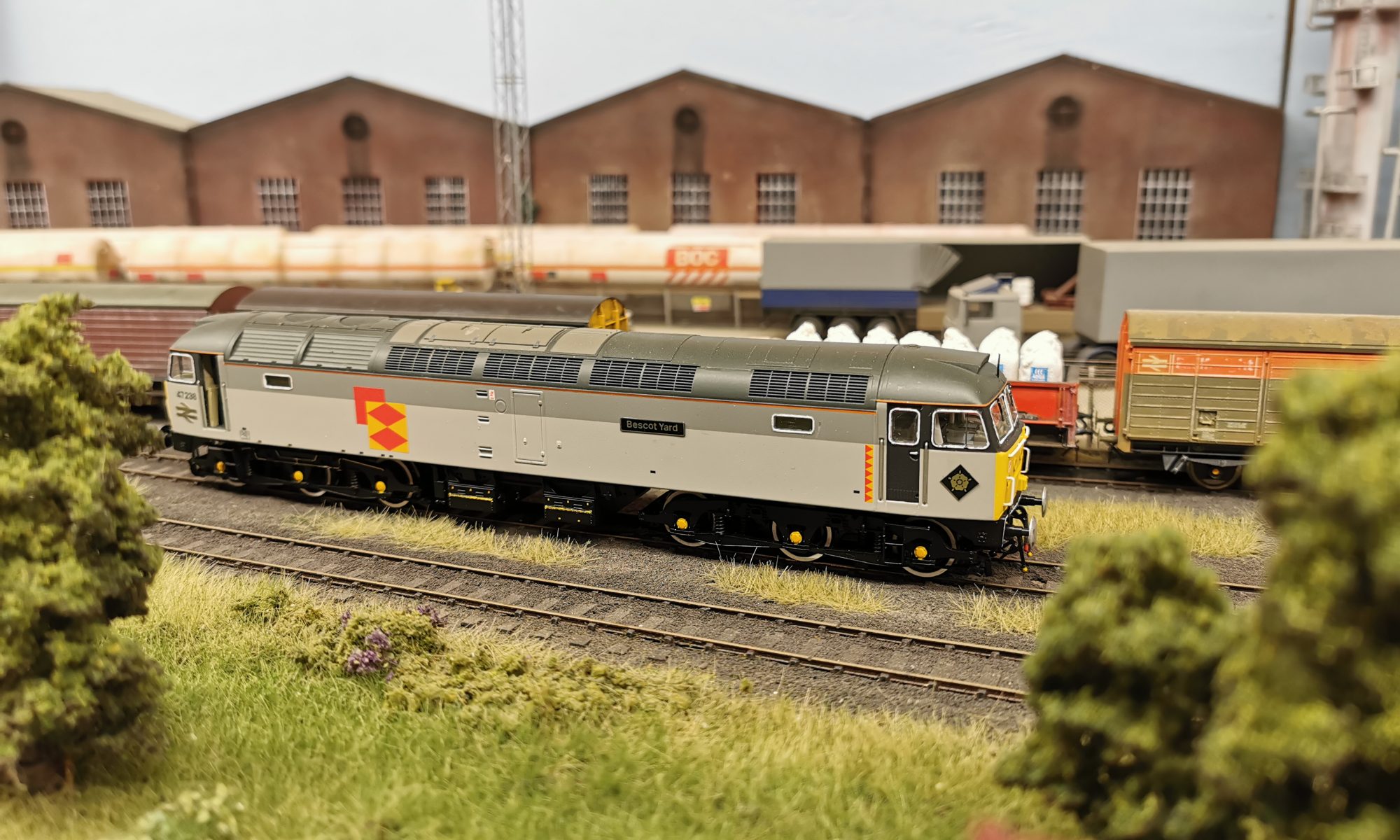 One loco that has always been on my radar to do is 47 238 ‘Bescot Yard’. In fact, I’ve had the nameplates for this loco for a number of years, buying them at a Wolverhampton model railway club show from the orignal Shawplan owner, Graham Shaw.

The donor loco for this project is a Bachmann 31-663 Class 47, 47 209 in Railfreight livery. The first job was to remove the windows, which is usually a simple job, but not this time. Some of the windows were well and truely glued in, and on being a little too heavy handed, one of the cab doors cracked and came off with the window. I don’t know what they used in the factory when this loco was assembled, but its good stuff! As a precausion, the remaining glazing was removed with Glue Buster.

At this point, I decided to cut out the rest of the cab door so the loco could be modelled with the cab door open. It is the summer of 1990 afterall. Part of the chassis needed to be cut out to allow the door to be open, and the wiring for the lights was rerouted to the other side of the cab. The cab and bulkhead also needed modification with the razor saw, and a new cab floor and brace was fabricated with some plastikard. All these were painted after they were fixed in place. A rumage through the parts box found a suitable cab door from a Hornby class 56. Although not identical to a class 47 cab door, it looked fine inside the cab. You can’t see enough of it to notice it’s different. A kick plate was made and glued to the bottom of the door, covering the lower door handle which is found on the class 56. I then made a plastic bracket and located the cab door in place.

Next, the loco numbers, nameplates and BR arrows were removed. The new numbers, etched nameplates, depot plaques and arrows were secured in place with some varnish. Attention could then turn to painting the window surrounds white, with a good quality brush and a steady hand. The same was done for the bufferbeam before fitting screwlink couplings and appropriate pipework. The glazing was then reinstalled using liquid poly, and the fuel tanks were also swapped to suit. The bogies were also swapped from another Bachmann model that already had the details painted in white. Yellow stripes were painted on the fuel tanks, and the buffer heads painted silver, as per the prototype.

Another year passes and another year I've not managed to get to Model Rail Scotland. Some great new announcements, and I'm definitely on for a couple (at least) of Accurascale UK 31/4's to renumber and repaint. ... See MoreSee Less
View on Facebook
· Share

Merry Christmas to all my friends and followers, old and new. Not much has happened for me in toy train land, as my other hobby has taken most of my spare time and cash. What did Santa bring you? 👇👇👇 ... See MoreSee Less
View on Facebook
· Share